Each step more cautious than the previous, often going off-balance, regaining his footing, struggling, moving forward, a toddler was learning to walk in the nearby park. His parents had left him to wander on his own under their watchful eyes. As he explored the world around him, he felt the rough stones under his feet, the wind blowing hard on his face, long legs passing in front of his body, craning his neck up to see features similar to his mom’s and dad’s, strange, smiling faces. Then, there were faces at his eye level, much easier to look, curious glances, trying to touch his face, grasping his hand. He did not accept that touch. He was a little apprehensive. But then he knew that they were similar to him than different. Freedom was exciting and independence was everything. Once in a while he glanced back to ensure that his parents were around. Without him realizing his tiny steps were making an arc with his parents at the center. Often he pushed his luck a little farther to make a larger radius as he ventured out. He was then lifted off the ground and put closer to the center. It was his dad. They would again let him walk in another direction. He moved confidently in that direction. New paths showed up. He discovered new friends and frontiers. A few minutes passed, the exhausted tot sat abruptly on the granite pavement. Concerned, his parents picked him up and took him into their arms. His face lit up and happily gulped the orange juice that he was offered. 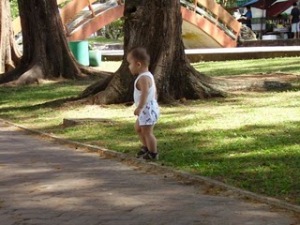 Later, while at home, an average middle class young man who I have come to assume of myself, was thinking about my priorities, working with my constraints to achieve my personal goals. To be frank, I realized that I was timid. As I sat waiting for an inspiring talk or picking up another self-help book,  the episode of that little kid learning to walk in the park hit my mind like a silver dagger. It put me into a deep thought. What could I possibly learn from him ?

Have it ever crossed your mind as young boys and girls why our teachers and parents kept on throwing at us the question — “What do you want to become when you grow up ?” The question about our ambitions put to us multiple times forcing us to answer, making us think. From a sailor in the rhymes to a political leader inspired from the chapters of inspiring Independence time leaders to the famous rock star holding his guitar, we were never short of role models to look up to. As time progressed, have you thought how those dreams matured. From a batman to IAS officer, fireman to Computer Engineer. Over time our dreams have been more so practical. But, I am not going to start a debate on why that transition happened. Perhaps, a topic to digress in detail at a later point in time. What caught my attention is the fact that why that question was put to us as kids when we had limited knowledge of the world around us. It was to motivate us, to make us think, to make us work towards an aim. This could have been asked only when were still young and not 20 years later for reasons that I am revealing below.

Going back to the tot steps, why did the parents knowingly or unknowingly let him walk ? Did they want him to get lost ? By no means. The only reason for this was the fact that they wanted the toddler to learn to walk. He should learn that himself, self-taught. It’s a basic lesson of life. In turn, he utilized that opportunity to learn, to venture, to see and to understand, take some risks, push himself to the edge to find out what happens, often looking back to ensure that he was keeping the focus right but yet having fun, repeating the above in a loop. Whenever he was hesitant and not progressing any farther than before his father would prompt him to move forward. So a dreamer, an adventurer it’s there in all of us. Consciously or not we were dreamers and had won many a races in life. But, how did we, you and I grow out of our inherent skills ? How did I unlearn that vital learning?  What is that I fear so much ? Are those abilities still latent and will I be able to rekindle that passion ?

In an attempt to rekindle that fearless spirit , to re-ignite those latent abilities, I posted a few questions to my cognizance. What made that little kid do that ? Can I draw a parallel in my life and career at least to an extent ? To get to this answer, I revisited that scene from the park and tried to walk with him and understand from his actions.

A new career, a business venture, moving to a new house, a new life — perhaps marriage, change in circumstances due to priority shift, transition from college to corporate life. One can draw  as many parallels as one wants about how important is the art of learning to walk is. There will be struggles. You may fall down and then you get up. This is a constant learning process. Would a child who is afraid of falling ever end up walking in his life? How many children have you seen like that ? Perfectly able child who is scared of tripping and falling down. Therefore, he avoided trying to learn to walk and would always sit. I am yet to come across people like that. Whereas I have seen people with disabilities standing tall and running fast. Coming back to the toddler from the park, with every failing step his muscles got stronger and so was his will to walk. He learnt what not to do to be stable. A day later he would try to stand up again on his feet and inch forward. He would then walk, pace, sprint as time progresses. All that forces him to get stronger are the obstacles. Real time translated — a doomed business, financial strains, a strained relationship, a failed marriage.

The kid’s observations
Observations come from the environment you thrive on and what the senses teach you. You will see a lot of people at lot of places – Your superiors, your bosses, market leaders high above you,  your colleagues your friends, your partners, your competitors at your level. In society too you will find your rich neighbor, the salaried class employee, the poor jobless average citizen. The kid saw it all, but did not stay there long enough for he had his goals. He had to move ahead. He did not have all the time to play but then he acknowledged their presence, made relationships. He saw the grown ups and those who are at his eye level. He moved constantly but with an underlying aim. He kept himself curious.

His parents and the radius he was making were his constraints, priorities and his faith. Personal and professional life would often have constraints. It is not that you can fly above your limitations. Remember Icarus, the son of master craftsman Daedalus. Icarus was gifted with a wax wing by his father to escape from the prison. In his curiosity he forgot his father’s warning and flew close to the sun. His wax wings melted and he fell into the deep-sea and drowned to death all in a successful attempt to escape from jail. There is some uncanny resemblance that one can notice between life and this story especially in this context. You will learn the ability to succeed and escape the prison of rat race but then your success comes with the understanding of your limitations. If you forget that your legs are tied and start running, you will eventually fall. This is one lesson that the kid knew by heart. At the end of the day he succeeded, he walked the earth below his feet.

The young little boy took the muddy road as well as the stony pavements. The ability to take the path he liked within that radius is the adventure he had. It helped him meet and see new people. It took him to new places. It was risky . His feet ached. But something took him forward though a little hesitantly. Adventure and risks have to be taken to learn, to challenge oneself, to prosper. It is what makes us look forward to the next day, to reinvent each waking day. It feeds the passion.

All these while he had kept faith, especially in his parents. But he had one more faith — in the people around him. He believed that the world’s always a good place. He might get some bad experiences as the walk progresses.  But he would come to understand that the world view was not made out of a few bad experiences and some failed experiments but the hundreds of cherishing memories and success that were yet to come. In the assurance that someone is watching you, he had got the warmth and the security for self-motivation and removing self-doubt. A mentor, a leader, a philosopher, a beacon of light would often come into the lives of those successful people helping them reach where they are. This may not be god or parents in the literal sense. Those who care about you and who can selflessly guide you when you are lost in the woods or lose in a game are those beacons of light.

Go ahead and analyze each activity of that kid from learning to walk to going to a school to growing up to be a person. I am sure you will get to know all that you have unlearned. One might think that this is just another motivational piece of article. But if you go one layer beneath your mind you will get to know that this behavior of us – the valorous kid in us is alive but trapped inside. We have hidden this behavior deep inside our minds with shells all over it. It would take some serious effort and motivation to break these layers of covering. What that means is for example in corporate life to ensure that talent is recruited and retained at any level mimic a kid’s life. Let him learn, give him challenges, reward him however small that might be and let him grow up. But in this new position let him be a kid and learn. So in every position the employee moves to he will start all over again. I am sure you are much more intelligent than me to read between the lines and extrapolate the rest. This is just one example that I shared with you to illustrate my point. It is up to you whether or where you want to use this philosophy. Just one thing, try applying it for yourself to find your dreams and succeed because it is more about you than him. I know you can go the distance and be where you want to be. So, just go ahead bravely.